How Today’s Street Signs Came to Be, Part 2: The MUTCD Evolves

15 Jul How Today’s Street Signs Came to Be, Part 2: The MUTCD Evolves

Posted at 13:42h in Uncategorized by denise
0 Likes
Share

Though the introduction of the MUTCD was a huge step forward in standardizing road signs and brought them much closer to their current form, the recommendations and mandates in the first MUTCD were very different than the ones today. Changes in the times, the roads, and the available technology neceesitated changes in the MUTCD, and many revisions were needed before it became what it is today. In today’s post, we will explore this second part of the History of the MUTCD: How it reached it’s current form. 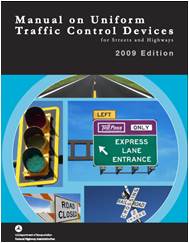 The 1935 MUTCD established the need for a manual that standardized the use and design of traffic control devices (TCDs). As the Nation grew and changed, the MUTCD has grown and changed. The manual has been revised approximately every decade to reflect that growth and change.

Early revisions were just that – supplements to the existing edition. For example, in 1939, the JC issued a 25-page supplement to the 1935 edition. The supplement recommended changes for sign illumination, speed signs, no-passing zone pavement markings, signal warrants, and pedestrian signals. And, although illumination was recommended, white reflectors (red for STOP signs) could be used to illuminate all signs.

As the end of the war neared, traffic engineers realized that the MUTCD had to be completely rewritten. Work on a peacetime edition began in 1944, and a new volume was published in 1948. The major format change in the postwar edition was reorganizing material so that every control device was addressed in only one place. There was also a concerted effort to simplify word signs, and a rounded-letter alphabet was adopted as standard for all signs. 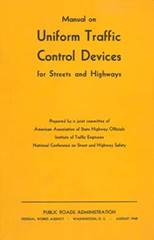 The 1954 15-page supplement to the 1948 MUTCD included 47 revisions and a brief description of each. The most significant change is that the color for the STOP sign was white letters on red background, which resulted primarily from the development of new fade-resistant finishes. The 1954 manual also represents the shift from using mainly regulatory and warning signs on interstate highways to including guide signs. This manual also adopted the use of white letters on green background for Interstate highways.

Changes incorporated into the 1961 MUTCD truly supplement reflected a changing America. The text was 333 pages long and the manual had two new sections, one to address construction and maintenance operations, which complemented a major section addressing needs of the new Interstate Highway System. There was also a section included for civil defense signing. 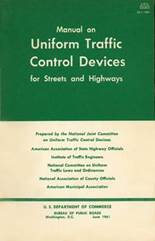 A completely rewritten MUTCD premiered in 1971. Some of the most significant changes included adding definition of “should,” “shall,” and “may” requirements. Orange was designated for construction signing, yellow markings separated opposing traffic, and there was a wider use of symbol signs. School signs were also adopted. 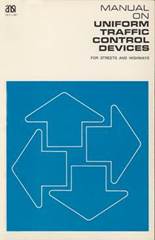 Succeeding publications of the MUTCD reflect the changing need of traffic control devices to accommodate increased traffic, higher speeds, more commercial traffic, and roads that serve travelers 24-hours a day in all types of weather. The speed with which technology, traffic control, and traffic operations change makes the MUTCD a dynamic and constantly changing document. This makes it difficult for those who depend on the MUTCD to remain current with new and changing standards and guidance. By publishing the MUTCD on the Internet, users have greater access to the most current information.