Posted at 17:44h in Uncategorized by denise
0 Likes
Share

“Dr. Pappalardo has an enduring passion for educating health care professionals. Under her leadership, she helped to secure the funding for the building and supported the development of one of the finest Nursing and Physical Therapist Assistant programs in the state,” said Ball, who will preside over the dedication ceremony on September 26.

Carroll has educated 576 graduates from its Associate Degree Nursing Program and 329 graduates from the Physical Therapist Assistant Program. The building groundbreaking was held in April, 2003 and the building was opened for instruction in October, 2004.

The building dedication was also an opportunity to share news about a special fundraising campaign in honor of Pappalardo called The Making the Difference Campaign, which has been underway for the past year.

“Educational needs are met through the generous donations of supporters to The Making the Difference Campaign,” said Executive Director of the Carroll Community College Foundation Steve Wantz. “The college will thank and recognize donors who have contributed significantly to The Making the Difference Campaign. Dr.  Pappalardo’s dedicated leadership during 15 years as president, which was part of 26 years of service to the college, created a wonderful atmosphere of student support and opportunities that will also be acknowledged during the dedication ceremony.”

Shannon-Baum Signs worked with Carroll Community College in Preparing for the Celebration by producing Acrylic Stud Mounted Letters w/ Brushed Aluminum Faces outside of the Building as shown, as well, as providing the college with similar interior lettering in a bronze finish. We are very pleased to of been able to participate in the dedication of this building for Dr. Pappalardo. 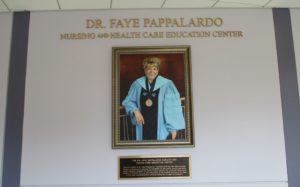 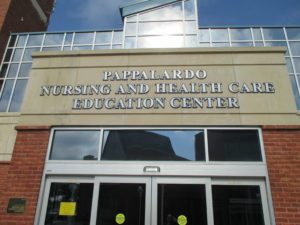